What are the Disadvantages of VPN? - Things You Should Know

Everything has its give and take. Even though we recommend using VPN to all our readers (mostly for online privacy) and have tested many VPN products to form our top recommended list, it’s our duty to you aware of some of the disadvantages of VPN.

Without getting into any rah-rah, let’s look at it.

Some Disadvantages of VPN

1. The internet speed slows down.

If you purchase a VPN, one thing you might notice after connecting to a VPN is you can’t download/upload as fast as you could without a VPN. This is especially noticeable if your internet connection is barely sufficient for the requirements.

For instance, if you use a 20 Mbps internet package, it can stream 4K smoothly (without a VPN). Add a VPN to the equation, and the 4K stream might start buffering. However, it depends on the bandwidth needed for the task & VPN provider. If you use NordVPN or ExpressVPN, the speed reduction will be negligible & streaming quality won’t suffer. But if Avast SecureLine VPN is used, even playing at FHD can be buffer.

This disadvantage occurs because all the data packets are encrypted & routed through the VPN provider’s server.

If you start using any non-sensical VPN you come across after googling “free VPN,” you might end up giving up your internet privacy. And that would be...IRONIC!

You see, some VPN providers (especially the free ones because they have to pay for the servers & technology) keep logs of your internet activity. Such information can further be sold to third parties or put on sale on the dark web. And that’s a considerable cons of VPN!

However, this downside can be avoided by investing a couple of bucks in a premium VPN. All of the best VPNs we reviewed have a “No logs” or “Zero logs” policy. And well, that’s one of the reasons you pay for it! 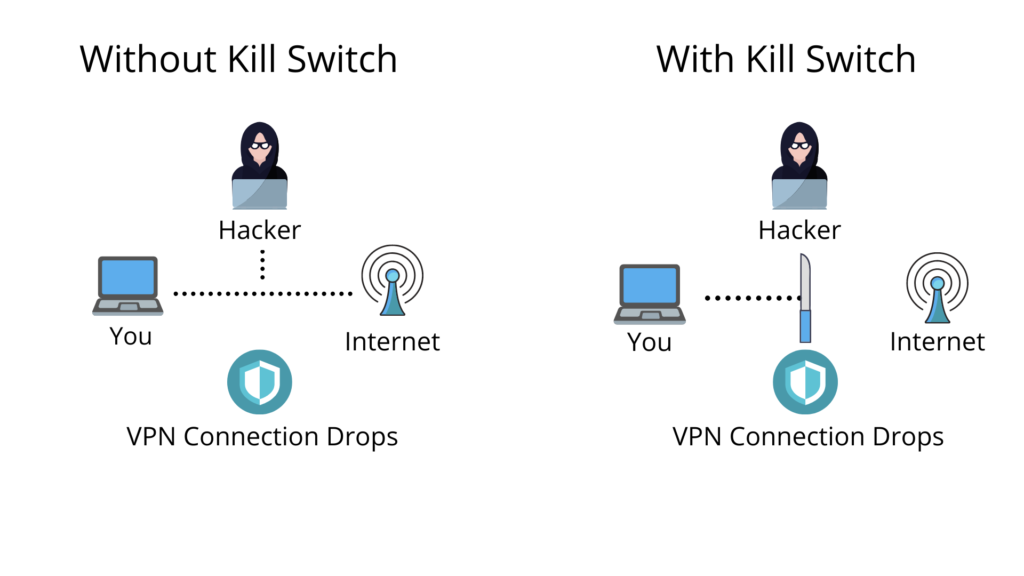 Most quality VPNs come with one essential feature: Kill switch. A kill switch turns off the internet activities in case the VPN connection disconnects.

This means whatever you are doing on the internet can stop in an instant. Imagine disconnecting from an important Zoom call because of a VPN server mishap!!

On the other hand, the feature is necessary because you have a reason if you are connected to a VPN. Maybe you are torrenting something or accessing some blocked website. And if the VPN goes off and the internet stays connected, you won’t be anonymous or surfing privately.

There is a solution to this problem, though. Some VPNs like ExpressVPN have a functionality called split tunneling, which allows you to use certain apps (like torrents) through VPN and the others (like YouTube) usually. NordVPN has a different approach to this ⁠— you can set apps that will be affected by kill switch, so when the VPN disconnects, only the internet activities on those apps will stop while others will keep running.

Countries such as Iran, Iraq, Russia, China, etc. have either banned VPNs or allowed a selected few but control it. If you are reading this article from one of these countries or want to access the internet from an IP of one of the nations, sorry, you can’t...legally!

5. Services can block you.

E.g., Po*n sites & illegal torrenting sites are banned in some countries while other countries have no such restriction. This means one can connect to a VPN server in a country that allows access and accesses it. Another popular scenario where VPN is used- unblocking geo-restricted content on streaming sites like Netflix, Hulu, Prime video, etc.

All these service providers have put those limits for some reason or the other ⁠— for example, Netflix could have a contract with the movie producer for a specific country. When you try to go past those limits, they can block you & the VPN offeror.

Though VPN has many uses, including complete online privacy, accessing geo-blocked content, protected file sharing, etc., there are a few downsides. However, if you are willing to shell out a few bucks on a premium VPN, most of the disadvantages of VPN are avoidable, and you’ll receive top-notch service.

Read our Blog for more information regarding VPN and many more...