The craze of PUBG Mobile & PUBG Lite in India is unreal. Even the most influential person of the country, India’s PM Narendra Modi, once joked about it while addressing an audience. To quote his words- “Yeh PUBG wala hai kya?” or “Is he a guy who plays PUBG?”

Such popularity comes with its own disadvantages. Time and again, PUBG has been labeled “addictive” and “dangerous”. As a result, the government has taken some strict measures in the past. In fact, PUBG mobile was once banned country-wide. And many speculators see the same thing happening in the future.

That’s a decision many gamers disagree with. Anyway, there’s nothing one can do if the government orders a ban.

A VPN will route all your traffic through a server outside of India. Meaning, when you’ll start the game, the machine will think you’re playing from outside of India’s geo-restrictions, and hence let you play.

A quality VPN for gaming offers fast server connections (i.e., lower ping or reduced latency), privacy & security to prevent you from any hacking attempts, and a lot of server options (across countries, essentially to bypass from geo-restrictions & faster connection).

Considering all three factors, we’ve compiled a list of the best VPN for PUBG Mobile and PUBG Lite in India.

The short answer is: no. Free VPNs are great if you want to surf the web anonymously or you want to visit restricted websites - and if you have the patience to wait up until everything is loaded.

However, gaming is a different story. Free VPNs usually have data limits, restricted speed, and compatibility issues, so even if you find a good free VPN that works with PubG (there are a few out there, to be fair), you will most probably experience constant lagging and delays.

So you have to ask yourself: is it worth the hassle and the headache, or you rather spend a few dollars/month and get not just military-level security but a flawless gaming experience?

If you also think that you deserve the lowest ping possible, let's check out our top 5 recommendations.

NordVPN has 5000+ servers located in 59 countries, which is currently one of the biggest arsenals in the VPN industry.

If you look at gaming-specific elements, using India’s & nearby countries’ servers, the ping remained consistently under 40 ms with our 100 Mbps plan. That is ideal for playing PUBG, but of course, with faster internet connection the ping will go significantly lower.

NordVPN dedicates enough bandwidth already, but their application will circumvent any ISP attempts to throttle your bandwidth during traffic peak hours, which will also lower latency, which results in smoother gaming sessions.

And the good news, you can use up to 6 devices with one subscription, so you can either play on multiple devices or share your login details with some of your friends and split the subscription cost.

Overall, NordVPN is not the cheapest option on our list, but if you are looking for the best performance, this is the right choice.

If you are still not sure if NordVPN is worth the money, you can try out their free 30 day trial and see it for yourself!

Try NordVPN for 30 days for FREE: 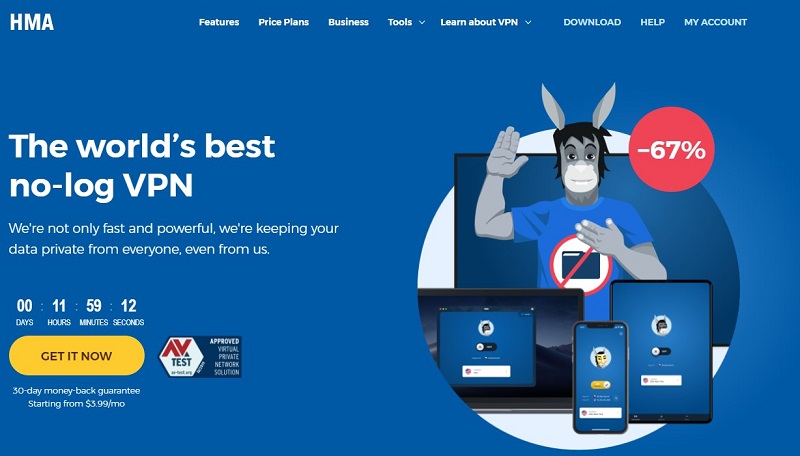 HMA VPN, or "Hide My Ass" as formerly known, is our #2 recommendation for PubG. They have their HQ in the UK, 400 million users worldwide, and are a part of the Avast family, a known entity in the security world.

With its offering of full privacy and strict no-logging policy, impressive global coverage of 190 countries & server infrastructure, maintenance, and connection security, it is, without a doubt, one of the most user-friendly solutions out there.

You can have unlimited HMA installs with your subscription, but you can use "only" 5 devices simultaneously.

HMA is the official sponsor of Fnatic and Warthox esports teams

Nothing is showing the dedication to gaming of HMA better than the fact that they have partnered up with some of the most popular esports teams in the world:

HMA's best price is ₹139/month, but across all plans HMA is by far the cheapest VPN option in our list, considerably cheaper than NordVPN: 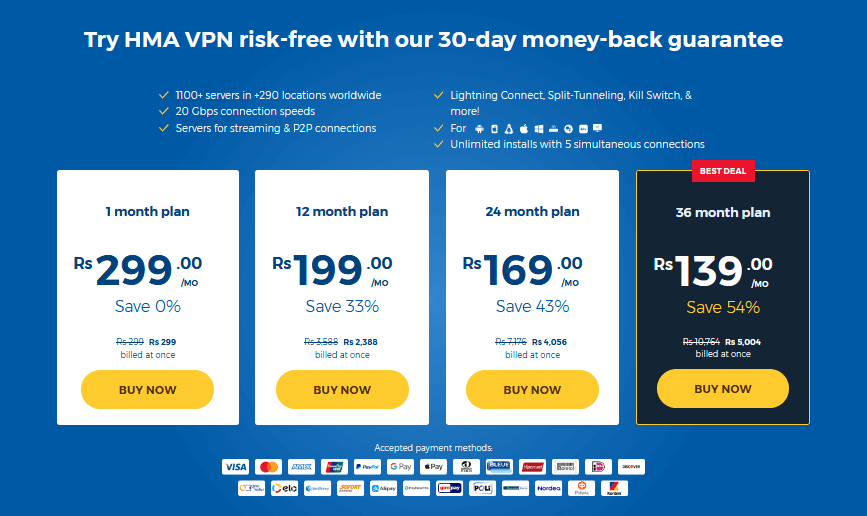 So why is HMA listed only as #2 below NordVPN?

There are two main reasons why we still recommend NordVPN over HMA:

However, if you don't have any issues with the offered payment methods and you don't absolutely need the lowest possible ping, then HMA is definitely the ideal choice for you as it costs basically half of the the price of NordVPN.

They also offer a 30 day money-back guarantee, so you can try it risk-free.

Again, a VPN from our "top 5 VPNs in India" list ⁠— goes to prove how comprehensive the testing behind the recommended list is!

Without beating around, let’s just look at the gaming performance with PureVPN. Short answer: smooth. Long answer: The average ping while playing PUBG from Indian servers was 60 ms. Servers from nearby countries also displayed similar numbers.

Meaning, PureVPN is another good option for PUBG Mobile & PUBG Lite in India. Altough it is definitely not as good as NordVPN or HMA, because both have better performance for lower prices.

ExpressVPN is also amongst our top favorite VPNs. Two of the primary reasons why we like it are:

As for its ping, it averaged 110 ms, in our experiment. In India and nearby nations’ servers, we were able to play PUBG under 50ms easily.

Overall, it’s a bit expensive compared to NordVPN and a lot more expensive than HMA, so to be honest, we don't see why it would be a better choice than the first two.

SurfShark is an absolute killer if you want a low-budget VPN and they have built up their brand around this message. Keeping its low-cost aside, from a gaming perspective alone, it’s amongst the better VPNs to play PUBG or any other online multiplayer game.

It has 1700+ servers across 63 countries, but the download & upload speeds we tested with SurfShark VPN were a bit disappointing, to be honest. And if you don’t have a good internet connection, we would not recommend SurfShark for gaming.

However, if you have high-speed internet, the speed reduction won’t affect your performance as much. In that case, ping becomes the most crucial factor. And SurfShark’s average ping of 90 ms stands among the good ones out there, sadly.

While playing PUBG using SurfShark’s Indian and nearby servers, the latency was well under 60 ms, making it good option for gaming, but again, why would you choose Surfshark if you have better options?

Using a VPN for gaming has several advantages, including playing geo-restricted games, lowering latency if you wish to play outside servers, and protecting hackers.

Ping is the main factor we focused on while testing all the VPNs. And frankly, many VPNs proved to have less latency, i.e., the ping bar in PUBG never turned from green to orange or red. However, as we tested the different VPN providers, it became evident that NordVPN and HMA stand out from the crowd, so we recommend you go with one of them.

Since both companies offer a 30-day FREE trial, it could be a good idea to subscribe to both services and stick with the better one after the trial period is over.

Anyway, we hope you found your ideal VPN for those Kar98k shots.