CyberGhost vs. NordVPN: Which is the Ideal Choice?

A while back, we compared NordVPN and ExpressVPN ⁠— the #1 and #5 from our top recommended VPNs. Today, we will compare NordVPN and CyberGhost, the #1 and #4 of the list.

In that article, NordVPN won mostly because of its affordable pricing. In this one, that won’t be the case because CyberGhost is comparatively cheaper. Still, NordVPN comes to be the eventual winner. Why and How? That’s what we’ll find out.

We will be comparing NordVPN and CyberGhost on the basis of features, ease of use, servers & speed, security & privacy, customer support, and overall value for money.

Both providers offer a top-notch product with apps for every device, thousands of servers across the globe, incredible customer support, excellent security protocols, zero-logs privacy policy, etc. In short, both are comparable.

However, if measured on a virtual scale, one is better than the other in some aspects. Which ones and how? Let’s find out.

The kind of features and the need for features a VPN provider offers can differ. Hence, it can be a deciding factor if only one has the feature you need. In addition to that, having the standard features such as kill switch and quick connect is also vital.

CyberGhost offers almost all features without giving any fancy names to it. The package includes the following features (as they title it on official site):

Overall, CyberGhost offers all the primary set of essential and non-essential features.

NordVPN has been the features-king throughout our comparisons, reviews, and listicles. It has all the features any commercial VPN has. We mentioned “fancy names” in the previous section because NordVPN markets the same features with different titles.

Here are the features:

Though NordVPN and CyberGhost offer fantastic features, NordVPN wins it because of its obfuscated servers that can bypass China’s firewall. Moreover, CyberGhost doesn’t have a multi-hop VPN option, while NordVPN has Doube VPN.

CyberGhost vs. NordVPN: Ease of Use

Both VPNs have apps for all major devices, including iOS, Android, Mac, Windows, FireTV,  Linux, and smart TVs. Moreover, Chrome and Firefox extensions are also available. These options make both VPN easily accessible, and it’s a significant part of “ease of use”.

However, how easy all these apps are to use will determine the winner of this user-friendliness factor.

CyberGhost’s UI is minimalistic and compact. They have chosen to fit as little as possible on its dashboard. Therefore, when you launch the app, there’s only one connect/disconnect button in the middle, which will connect you to a random server. 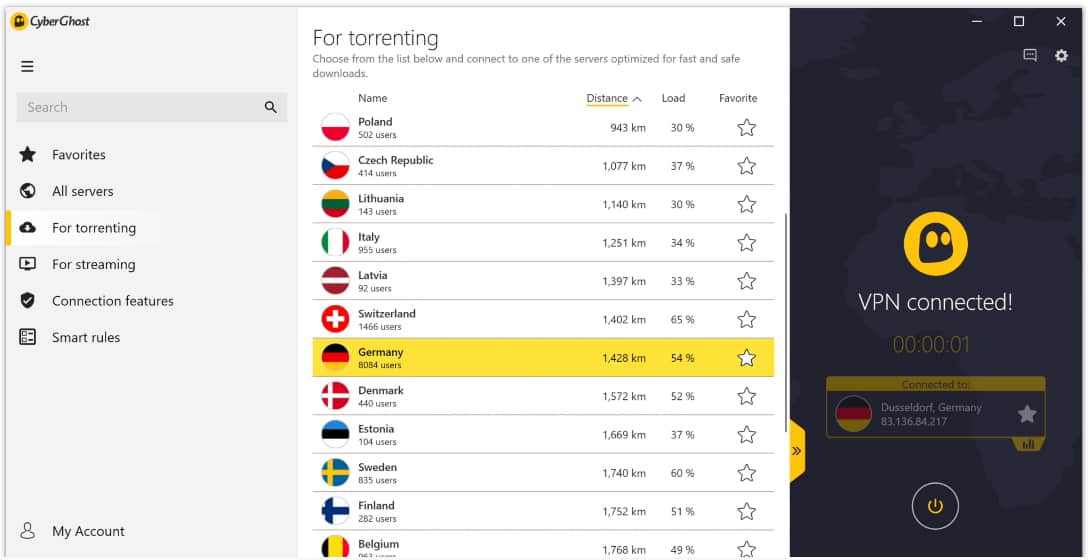 To choose a specific server, you will need to expand the UI. There, you can either search for the server of your choice, or filter the servers depending on the activity- torrenting, streaming, or surfing.

Overall, we really like the effort put into categorizing servers for activities. However, the “minimal” design that demands an extra step to choose a server of choice can be a dealbreaker for some.

NordVPN’s design is a bit bulky but more practical compared to CyberGhost. Once you log in, all the connection options are right there. 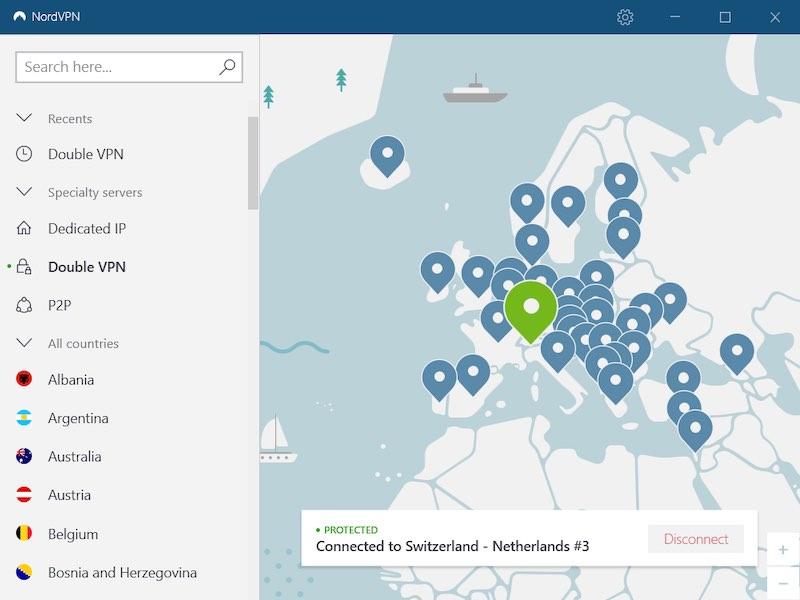 All in all, we love NordVPN’s practical approach to UI instead of making a fancy interface. This makes for great user experience, in our opinion.

Both NordVPN and CyberGhost have their way of looking at UI/UX. A layperson can easily understand either interface. However, two main differences make NordVPN a more user-friendly option for us:

Perhaps the most crucial element we look at while reviewing and suggesting a VPN is the number of servers offered by the VPN and the average speed throttling when connected to those servers.

CyberGhost has 6200 servers in 90 countries. As far as we know, that’s the most number of servers a VPN company has. Also, coverage of 90 nations is the most by any VPN provider.

Such massive coverage means you can unblock any content available in those countries. We tried it and were able to unblock Netflix, Hulu, Prime Video, BBC iPlayer, ESPN sports, and all major content platforms.

NordVPN’s server network extends to 59 countries with its 5200 servers. These numbers are also extraordinary if looked from a broader perspective. However, compared to CyberGhost, it seems a bit minuscule.

In practical life, NordVPN was able to unblock all the content from major streaming platforms. Plus, among the two, NordVPN is the only one that can be used in China.

Overall, NordVPN’s speed throttling is among the least in the VPN market, which is impressive. It proves that the servers aren’t overfilled, and there’s bandwidth for all.

CyberGhost wins for its number of server options. But, practically, the better speed offered by NordVPN is more crucial. You can choose what’s more important to you; we’ll call it a tie.

Winner: Both or NordVPN

Security and privacy are the top two reasons why VPNs were invented. And it still remains among the top reasons people purchase a VPN, alongside accessing geo-blocked content, torrenting, and gaming. As a matter of fact, it’s a part of all the activities.

As already mentioned, it uses OpenVPN, IKEv2, L2TP/IPSec, and Wireguard protocols. These are the most popular protocols in the VPN market.

For security, it uses the 256-bit military-grade AES encryption. In simple terms, even a supercomputer will take millions of years to decrypt it by brute force.

As for privacy, CyberGhost is located in Romania, which is not in the 5-6-14 alliance and has great privacy rules. Plus, CyberGhost’s zero-logs policy and independent audits prove that your information is safe.

NordVPN is almost the same as CyberGhost. It uses OpenVPN, IKEv2/IPSec, and NordLynx (by WireGuard) protocols. The encryption algorithm is also the same: the super-strong AES256-bit algorithm.

The headquarter of NordVPN is in Panama, which again is not a part of the 5-6-14 alliance and has concrete privacy rules. Moreover, the zero-logs policy ensures your privacy.

We didn’t mention Double VPN, Kill Switch, etc. like features in this section. If those were mentioned, NordVPN would have been better. However, at the fundamental level, both use the same protocols & privacy policy.

Perfection is a myth. Mishaps happen. And in such times, the customer support team must be ready to solve users’ queries.

CyberGhost offers email (through a form) and live chat support options. It also has an extensive FAQ section that answers most general queries with guides, information, and troubleshooter.

While reviewing, we chatted with their live chat a few times. Each time, the response time was under a minute, the support agent was knowledgeable, and the queries were solved almost instantly.

NordVPN has an extensive knowledgebase & video tutorials for common queries. If neither works, you can contact their support team via email or live chat.

In our experience with their live chat, we got prompt responses from trained support agents. The queries were solved then and there.

Both VPN companies’ support agents are experienced and experts. From the support aspect, you can’t go wrong with either.

From the average users’ perspective, the cost of the VPN is important. There’s a budget, and anything beyond that ⁠— no matter how good ⁠— is simply unaffordable.

CyberGhost is one of the top low-cost VPNs in the market. The 18-month plan costs a mere $2.75/month! With this plan, you can connect up to seven devices. In short, it’s super-affordable.

NordVPN is also economical. You can buy the 2-year plan for $3.71/month. This plan supports up to six devices connections simultaneously!

NordVPN is cheaper compared to Cyberghost in Monthly plan Section. However, both VPNs are bang for the buck. For the extra cost, NordVPN offers the additional value in form of better speed & features. Still, for this section:

Throughout the comparison, CyberGhost and NordVPN were comparable. NordVPN undoubtedly was a bit better for the most part, but CyberGhost’s low-cost compensates for it. In a nutshell:

Overall, both VPNs are recommendable. If you have the budget, we would suggest you go with NordVPN. If not, CyberGhost is an excellent option.