Hostinger vs HostGator: Which is Better?

We put these Webhosts to the test to find out which is the best!

When two giants of web hosting ⁠— Hostinger & HostGator, both highly recommended for entry-level users ⁠— compete to win the customer, things get interesting, like it’s an India vs. Australia cricket match. Here, you, the customer, are the trophy, and the one that wins compels you to buy from them.

Unlike a cricket match, people don’t (directly) contest for the win in the web hosting market, though. Things like hardware quality, software optimization, server location, server load, server availability, number & types of features, etc., play a significant part. These elements affect the stats that humans, like us at Forrst, test to show which of the two is superior.

For this article, we compared Hostinger’s and HostGator’s features, loading speed, uptime, user-friendliness, customer support, and more. Read on to find out which one’s better.

Hostinger vs Hostgator – How do these compare?

Comparing web hosts’ features can help you filter out unnecessary-for-you hosting services. And it’s one of the easiest things to do because most providers mention (on their landing pages) the features they’ll be giving. Naturally, Hostinger and HostGator do too.

Hostinger plans are super-cheap and are fantastic value even without the value-added features they come with. Still, all three of its web hosting packages add something unexpected in the price range. For example, Rs. 79/month Single Web Hosting comes with the following:

In short, if you are looking for beginner-level hosting at a low-cost, Hostinger is a solid option features-wise.

HostGator, though not as cheap as Hostinger, has all the needed features, especially for beginners and SMBs. Its Starter plan includes the following:

Hostinger and HostGator pack similar features. The only difference being HostGator gives a free .net domain and more than one email accounts. If looked at wholly, Hostinger’s features for the price are better than that of HostGator’s. So, unless you need multiple professional emails on your sitename.net, we’d say-

Hostinger or HostGator – Ease of use

As mentioned at the beginning, both Hostinger and HostGator are web hosting giants with millions of users. And, quite obviously, most of the users aren’t tech-savvy. All web hosting companies know this fact; hence, they try to make things as intuitive and straightforward as possible. How well have these two implemented everything one might need?

Let’s start with the signing up process. One simply has to open Hostinger’s official site, click on the type of hosting he/she wants, choose a plan, and checkout. Pretty straightforward.

Once you log in, you will land on a pretty clean-looking dashboard. Here, you can check your domains, hosting plans, email plans, servers, SSL, billing, and other account-related settings by clicking on the top-bar menus. For managing your hosting account/server, you’ll need to open hPanel, which is accessible by clicking “Manage” from the hosting window. 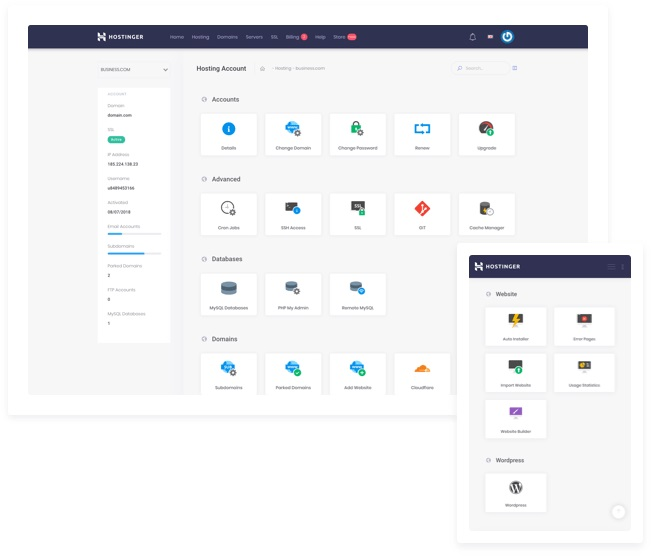 hPanel will help you do everything from adding/managing/deleting domains, email accounts, subdomains, addon domains, files, and databases to installing CMSs like WordPress. Everything is clearly labeled and in GUI form. Of course, if you wish to make changes using the shell, SSH access is also provided!

Overall, you won’t have any problem managing your websites if hosted on Hostinger.

Registering with HostGator is the same process as that with Hostinger. Similarly, the dashboard contains more or less the same things found on Hostinger’s dashboard. The main difference is in the UI of HostGator’s control panel. 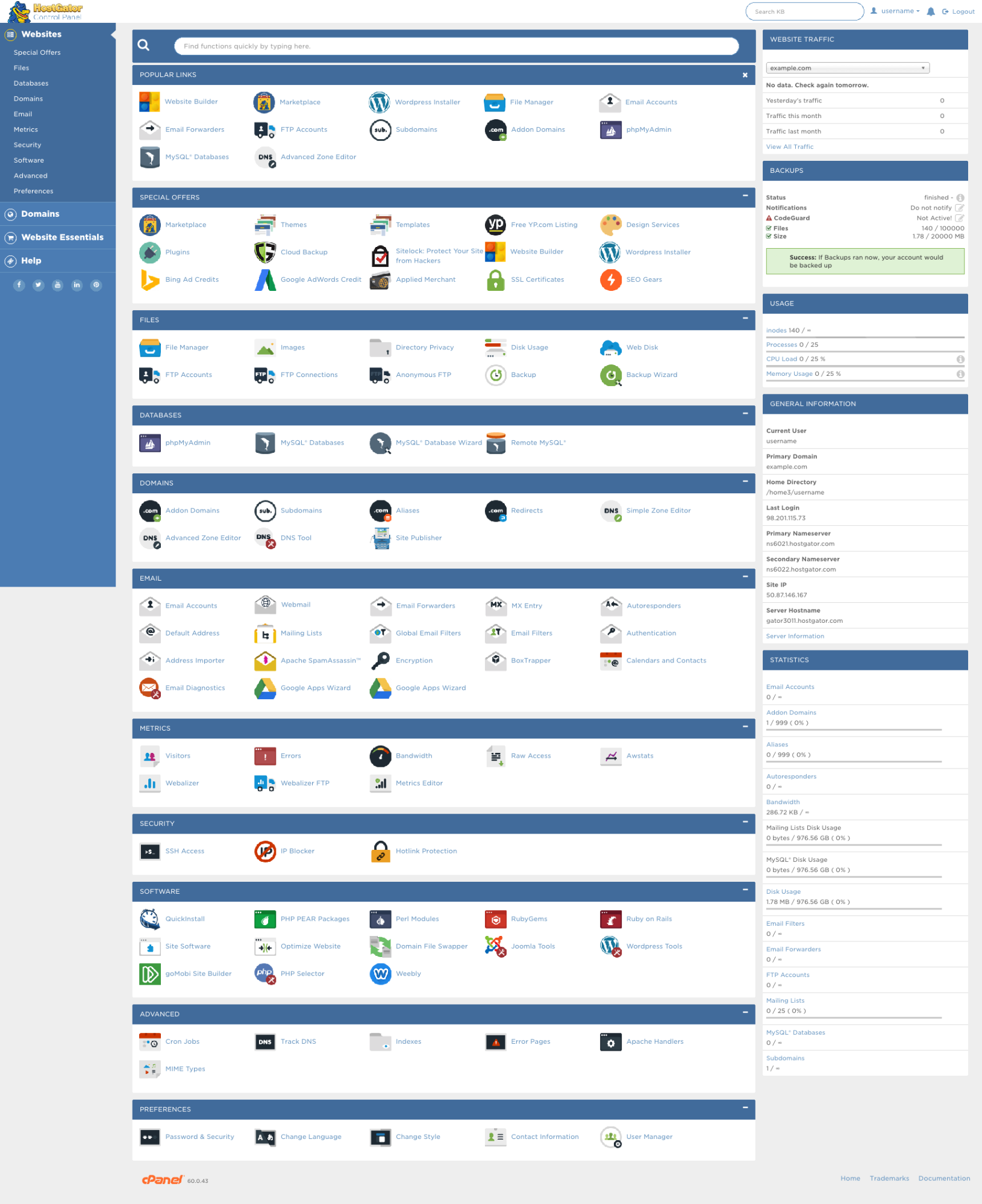 HostGator users the ever-popular cPanel. It has all the functionalities needed to manage your website, including managing domains, emails, files, databases, and much more. However, we don’t like the cPanel look very much ⁠— yes, it’s good, but many other custom panels look better. It’s just a minute detail, and you’ll be opening the control panel rarely, but just in case you wanted to know.

Both providers’ understanding of user experience is on par. HostGator choosing to go with cPanel is something we don’t like UI-wise; however, there’s no denying many people will actually prefer cPanel. Therefore…

Which one makes more sense between Hostinger & HostGator? Let’s find out.

Hostinger is our favorite web hosting. So, it’s obvious it performs well. How well? Well, in our experiment, the website hosted on Hostinger was almost always live except for a couple of short outages. Numerically, our site was up 99.99% of the time. That’s fantastic!

Then, we look at the total time it takes to load a whole web page, i.e., loading speed/time. Our sample WordPress page took a mere 500 ms to load wholly. That’s super-fast!

HostGator’s servers, on the other hand, measured 99.97% uptime. This is also awesome because the recommended number is 99.9%+; ideally, of course, you want 100% uptime.

As for server response time, that number stood at around 180 ms. Again, under the recommended 200 ms limit. Similarly, with 600 ms loading time, it was fast enough to beat the recommended speed by 150%+.

Hostinger’s numbers are astonishing as they are ⁠— put its low-cost in the equation, and Hostinger’s performance becomes exceptional. HostGator also put up some solid numbers ⁠— everything way better than the recommended limits. Still…

Customer support is another crucial aspect we check before recommending a web host. After all, an exemplary user interface doesn’t solve all problems for non-technical people. Hard to grasp technical aspects like installing SSL on the server-side needs some sort of assistance, and an excellent technical support team does just that.

Hostinger only has 24/7 live chat support. And it’s understandable ⁠— to offer quality services at such a low price, cost-cutting is essential, and Hostinger does that by not hiring a phone support team and likes.

We chatted with the team a few times and found the support agents supportive, knowledgeable, and professional. Plus, we got replies almost instantly most of the time.

HostGator has the budget to offer a wide variety of customer support. You can get in touch via live chat, email, support tickets, phone calls, and even send them a fax. Each medium has its pros & cons, of course.

For a fair comparison, we chatted with their support team via the live chat option. In our experience, the support agents we quick to respond, professional, and experienced.

You won’t be disappointed with either provider’s customer support. However, just because HostGator has multiple communication options-

Yes, Performance & customer support & intuitive UI are a priority. But getting the best mix of all under the decided budget is what picking a web hosting is all about. So, are both Hostinger and HostGator under your budget?

Hostinger’s shared plans start from Rs. 79/month and go up to Rs. 279/month. Then, they have cloud hosting starting at Rs. 799/month, WordPress-optimized plans from Rs. 79/month, and VPS hosting from Rs. 285/month.

These prices are introductory and apply only if your pre-purchase for 48 months. However, if you buy a long-term plan and don’t like it, you can get a full refund in the first 30 days.

Hostinger’s plans are cheaper compared to HostGator’s. Therefore, if simply pricing is taken into account, Hostinger is the clear winner. If everything is compared, Hostinger still remains the winner but not so clearly.

The Winner Is - Hostinger

Hostinger and HostGator both feature in our top 5 web hosting recommendations list. So, we obviously like them both. If you are a beginner or own a small/medium-sized site, you can choose either of them.

However, if you aim to get the best for as little as possible, we’d recommend Hostinger. It gives the phrase “bang for the buck” a whole new meaning. For mere 79 rupees, you get superior performance, professional support, great aesthetics, and much more.

What else can one ask for?!